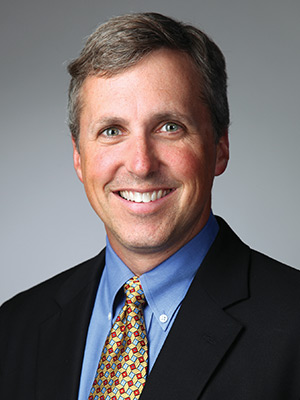 Mr. Holmes earned a BA in political science from Baylor in 1988. He earned a law degree, with honors, from the University of Texas at Austin in 1991.

Mr. Holmes has served in a number of leadership positions in higher education. He served on the Board of Directors of the National Association of College and University Attorneys from 2014 to 2017. He has chaired several committees for NACUA, including the Committee on Legal Education and the Committee on Web Page Legal Resources. In 2011, Mr. Holmes received NACUA’s First Decade Award, which recognizes members who have provided outstanding service to NACUA and to the practice of higher education law during their first ten years of service in higher education. Mr. Holmes currently serves on the Board of Directors of the Big Bend Conservancy, a non-profit organization benefitting Big Bend National Park.

He and his wife, Dawn (BSEd, ’89), have four children. Elise, Ridley, and Celia attend Baylor, and Clara attends Live Oak Classical School, where Dawn teaches. He and his family are members of Harris Creek Baptist Church, where Mr. Holmes serves as an elder.